In September of 1991 I was in Grade 8, was 14 years old, and was a closet D&D player. See, back then it was in no way “cool” to be into Fantasy Role Playing games. I had friends who didn’t care about what other people thought, and did what they enjoyed, but I was far too concerned with being “cool” to take such a risk.

Never the less I was addicted. I loved the game, and loved pretending to be a noble warrior, wise mage, or crafty thief. At the time the Dungeons & Dragons franchise was still owned by TSR, and they had a monthly magazine called “Dragon Magazine” I didn’t have a subscription, but I did make sure to walk to my local bookstore, and buy a copy every month.

Little did I know it then, but Dragon Magazine Number 173 was about to completely alter my worldview. That particular issue had an article about NERO in it. That article would be my introduction to Live Action Role Play (LARP), and I was completely blown away.

Unfortunately at 14 without a car, a license, or money it just wasn’t going to happen. Eventually, I stopped dreaming about such things, got interested in girls, got a part time job, and essentially forgot all about the excitement that article inspired. Every so often some hint or idea popped into my head, and I’d do a little research but ended up moving on to more adult pursuits. That is until about a month ago.

That was when a friend found his way to a gaming convention in Vermont, where he met some people who LARP at the Bicolline site. A month long whirlwind of research and making contacts later, and there I was!

A few hours North and West of the Canadian city of Montreal, in the province of Quebec sits a 2 mile, by 2 mile hunk of real estate known as the Duchy of Bicolline. At this site there are over 400 permanent buildings, built by players, and designed look like something out of a Tolkien Novel.

They host a number of events on site throughout the year with the largest being their Grand Battle where between 3,500 and 7,000 people show up for a week long event full of crazy Fantasy coolness. Unfortunately this is not an article about that event, but I will absolutely write that article after I go to it (the next one is in August of 2020).

In addition to the main event they host several weekend long campaign events, a ball (held off site in a factory converted to look like a medieval village), and several tavern nights at their authentic looking tavern. In 2019 they held just over 30 events of various types.

I was thankfully able to go to the final event of 2019, which was a Tavern Night. As with all events at Bico pseudo Medieval garb is required. There is a minimum standard of Decorum which you can check out on their site, but I went a bit above the minimum.

One important thing to note is that though the location is in the French Speaking Province of Quebec, I am not even a conversational French speaker. I am trying to learn because I try to respect the local cultures wherever I happen to be, but everyone I met had at least conversational English.

I certainly recommend trying to learn the language in order to make things a bit easier, but it isn’t necessary. Its also important to note that the language spoken is actually Quebecois, which is a dialect of French as opposed to formal French which many of us learned in Middle and High School in NH.

Bicolline is a game of guilds, there are lots of them, some are English Speaking, but you don’t need to join one to come and have fun. After some research on the Bicolline Official Facebook page, and the Community Page I was able to meet someone from one of the US based guilds, chat with him a bit, and get invited to not only ride up with him, but stay in his Air BnB  as well. I am now in the Guild, it is called Realms Embassy, and if you are interested in finding out more info, you can message me privately, or comment below and I will reach out to you.

After about 4 hours on the road, I came to the site. It is (understandably) surrounded by a tall fence, but peaking over the top you can at least see several rooftops. Needless to say, my level excitement was growing to epic proportions. Honestly, up until I stepped out of the car into the frigid Northern air, I was half convinced that it wasn’t real, that I had been duped, and was about to be sold as spare parts.

There were already about a dozen people, in garb waiting in line to register. The wind was cutting, and the air smelled of cold and wood smoke. After waiting in line for several years (actually about 5 minutes in grown up time), I gave them my name, and they gave me a bracelet such as one normally gets at a club, or a museum and I wandered towards what seemed like the entrance.

There was a small alcove with a heavy curtain covering an opening in the fence. I walked through, like the wardrobe in the spare room, and was transported, not to Narnia, but to Bicolline!

Inside the streets are lit by softly glowing lanterns, and light streams from the windows of the Inn. The rest of the buildings are dark, but I can see them lit up during the summer events in my minds eye. There is definitely something of a “through the wardrobe, and into Narnia” feel to it all. There are a few other people on site already, but it is hard to see much detail due to the fact that everyone is bundled up because of the weather.

Once I walked by the roaring fire pit, up the stairs, and into the tavern itself everything came alive with noise, warmth, and laughter. There were only a few of us in the beginning, but before long it became difficult to move around. On Facebook, I described it as spending a night in a Tavern in Hobbiton, and that’s essentially correct. Everywhere I looked increased the sensation of being transported far away in both time and space.

To further increase the feeling of being outside of the banal world of work, school, bills, and responsibility; all around me I heard the sounds of a foreign tongue. Quebec, where Bicolline is located is a French speaking province of Canada, and most of the tavern goers were from Quebec. The lack of comprehension was no barrier what so ever when it came to communication though. Everyone I spoke too had conversational English. I kept attempting to assimilate by learning from those I spoke to, but had limited success.

As I bellied up to the the bar, I decided to order a Cider. The bartender asked me if I wanted to try the new Cider. I smiled, and informed her that it was all new to me. She poured me a Carafe and sent me on my way. In Canada they don’t sell pints, they sell Liters. In case your conversion is off, a Liter is roughly two pints. Couple that with a significantly higher alcohol by volume, and you can see where the night is heading!

I quickly found myself in conversation with some Scotsmen, and a couple of Vikings. The Scots were native English speakers like me, and have their own guild based out of Northern Vermont. This brings me to a good point, if you want to go to Bico, just do it.

You don’t need to join a guild right away. I did, and am happy with my decision, but being part of a guild is not a requirement.  It is helpful to have someone help you navigate things like lodging and transportation, but most of the English speaking guilds will happily provide assistance without forcing you to join.

One key fact to consider is the where and how of your sleeping arrangements. If it’s warm weather you can bring a decorum tent, rent a tent from Bicolline, or bring a modern tent. They will just ask that you camp somewhere out of site if your tent isn’t decorum (fits in with a Fantasy aesthetic). If it’s cold weather I suggest finding an Air BnB nearby (Shawnigan, QC is close and has several), or getting a hotel. Make sure you have a designated driver as well, the Canadian Authorities have ZERO tolerance for DUI, and at best you’ll find yourself banned from travel to Canada for the foreseeable future.

As the night wore on the bar became crowded, and I started spending more time outside by the fire. I spoke to lots of different people, and having been inspired by my surroundings (and the aforementioned cider) broke into song. I’ve long been a fan of Irish Folk music, and though I imagine most of the other folks had heard French versions of my limited song list, they were a kind and compassionate crowd, showering me with praise, and applause.

Before long others started singing Quebecois folk songs, and despite not understanding the lyrics I was able to catch on to the chorus with only a little difficulty. That meeting began with a song that has little difference in either English or Quebecois. “What Would You Do With A Drunken Sailor” is apparently the modern Rosetta Stone of ethnic folk music.

At some point while giving my voice a rest a few Romans introduced me to swearing in Quebecois, and I followed the Scotsmen to one of the cabins on property. After that the details begin to get a bit fuzzy, but it was by far and away the most magical experience of my life thus far. I am assured however, that the Tavern Night is the least fun sort of event that they do at Bico by a fair margin.

My recommendation is to find your way there as soon as humanly possible!

Ask on the Community Page for further advice on a trip, or contact me directly, and I will happily point you in the right direction.

Once you are on site, ask any of the English Speakers if they know Gawyn Darkhollow, The Realms Embassy Guild, or the Horse and Hound Guild. Any of us would love to meet you! 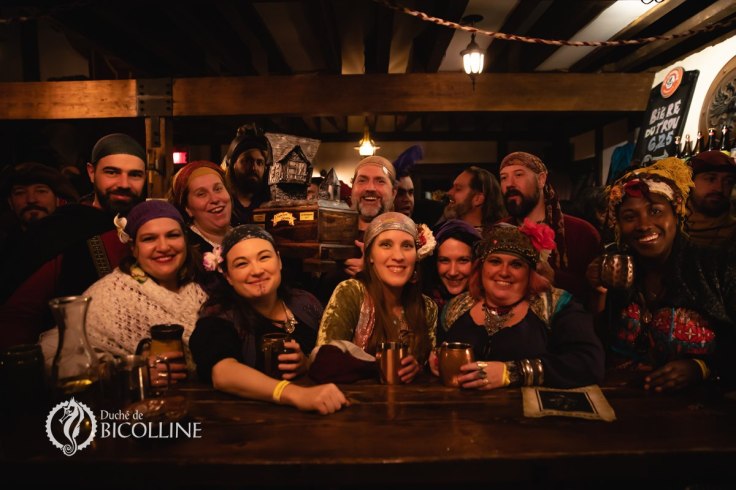 A Note on Copyright: Apart from the one picture in this article of me in my garb every one of these photos came from the Official Biccoline Facebook Page, and are the work of the very talented photographer and world renown armorer Eric Dube.

Start a Blog at WordPress.com.